Market at a Glance

The trends that were forming in the first quarter of 2016, now are affirmed.  As usual, the two most important laws of economics – the laws 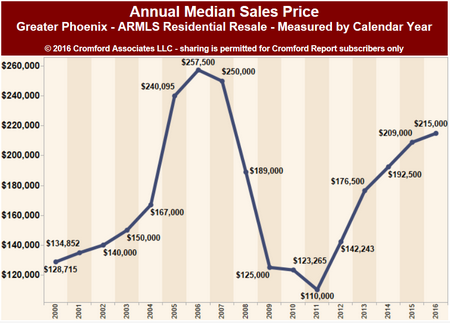 of supply and demand – are the driving force behind the trends.   Demand - the more fluid and fickle of the two- is up.  In fact demand has returned to levels not seen since 2013.  Supply, the slower moving component, has fractured into distinct market segments.  No one captures this market snapshot better than Michael Orr of the Cromford Report when he states:

From $275K to $350K we see very healthy market conditions with new supply and closed sales both up significantly from last year.

From $350K-$400K the growth in supply was strong, but sales growth was much weaker than average, suggesting there may be a few problems developing for sellers. However from $400K to $500K the percentage growth in new listings was matched by the growth in closed sales. I would describe this sector of the market as normal, healthy and growing, with no major shortages of buyers or sellers.

From $500K to $800K new supply outstripped the growth in sales, so even though there was a healthy increase in volume we see more competition building between sellers.

From $800K to $1M the increases were balanced but we do see 3 times as many new listings as we see closed sales. This is likely to mean higher cancellation and expiry rates and long times to sell ahead. It also means minimal upward pressure on pricing.

The issue for sellers with homes priced over a million is that the number of new listings outpaced sales by at least 3.4 to 1. This is not unusual for this segment, where new listings comfortably exceed closed sales at all times. The bad news is that sales were slightly down (-1.4%) from last year, primarily due to surprisingly poor performance by the segment from $1M to $1.5M. Yet new listings were up almost 15% for homes over $1M. This is a good situation for luxury home buyers, but it is not very good news for sellers who would like to see some appreciation. The current market environment over $1 million is consistent with a flat to slight downward trend in prices, long times on market and high rates of cancelled and expired listings. There are some very fashionable locations (close to urban centers) where this does not apply, but the bulk of the luxury market has reasonably good demand but excessive supply. Because of the good demand, agents will be happy with the transaction volume, but sellers are likely to be disappointed with the sales prices that can be achieved, and how long it takes to achieve them. These sellers hear about prices rising both locally and nationally, but unfortunately it does not apply to them.

The question of why inventory has jumped so markedly in the 500K+ range has garnered some attention lately.  National analysts have begun speculating on this trend, much as they did last year when bemoaning the apparent lack of interest in home ownership by millennials (a theory we do not subscribe to).

A theory put forward by several national analysts, particularly Stephen Kim of Barclays, is that a long term secular change is under way. They believe a wave of empty nesters is seeking to downsize, and now that the market has recovered from the crisis of 2006-2009 they are planning to do so in growing numbers. If a large number of baby boomers want to sell their suburban luxury homes at the same time, we are going to see an imbalance of supply and demand. ..We are seeing a rise in discretionary renting, where older homeowners sell their large homes and move into smaller rental homes. They appear to prefer upgrades and amenities to square footage. They are probably using their home equity as a source of funds to enjoy their retirement.

Although we are no analysts, the jump in supply does not seem particularly shocking to us.  To our minds, this is the same “coiled spring” theory that demand operates on – so why not supply?  When demand is artificially held down for an extended period of time, the recoil once released is greater than expected.  So too, we believe, does supply follow the same “coiled spring”.  The homeowners who lost their homes in the greatest volume were those in the lower end of the market.  The higher end homeowners faced with negative equity – simply had to wait out the market.  Having waited for years for appreciation to make home selling an option again, that coiled spring released numerous sellers back in to the market.  At least according to our theory.

Whatever the reason, supply and demand continue to be an interesting equation in our housing market.  No matter the reasons, we will do our best to keep you informed on housing trends.  As always, we appreciate the continuing confidence of the clients we are so lucky to serve.